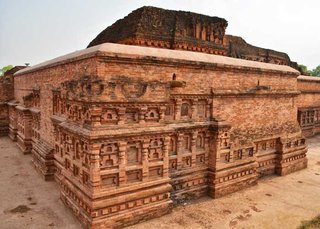 Buddhism had not only had its beginning on the Indian sub-continent but also had an impact on its civilisations for centuries. Even in the 4th century AD, Buddhist sanctuaries dedicated for education existed in Nalanda, a place which is nowadays situated in the state of Bihar, in north-east India. These institutions were comparable to the European universities, which first founding period however was about 600 years later.

Max Deeg is currently Visiting Research Fellow at the Käte Hamburger Kolleg Dynamics of the History of Religion between Asia and Europe and dedicated an article to the Nalanda university system in German popular science magazine "Spektrum der Wissenschaft". More than 3000 monks and layman from all over Asia were attracted by this institution of Buddhist teaching and enrolled for courses in Buddhist Philosophie, but also more non-religious subjects such as medicine or grammar.

The importance of Nalanda for the Buddhism in Asia and its fall into obscurity after the 13th century AD are impressively discussed by Max Deeg in his article (German version only).