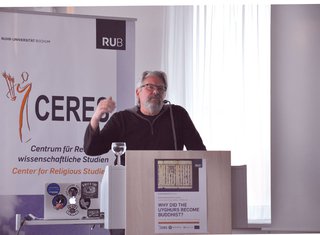 Johan Elverskog is a professor of Religious Studies at Southern Methodist University in Dallas, Texas, and an internationally renowned expert for Buddhist history in Central Asia. He was a visiting research fellow at the Käte Hamburger Kolleg Dynamics of the History of Religions in 2013 where he conducted his research on the history of religions of the Mongol Empire.

Since he is currently Nina Maria Gorrissen Fellow in History of the American Academy in Berlin he came back to Bochum for strengthening ties and present his current research. His lecture on how the Uyghurs became Buddhists was the first on-site event of the BuddhistRoad team since the beginning of the Covid-19 pandemic. Usually, BuddhistRoad lectures are held online due to the regulations to combat the pandemic.

In his presentation, he started with a focus on Bügü Khan (b. 759, d. 779), the ruler of the East Uyghur Khanate (ca. 744–840, also known as Uyghur Steppe Empire), who converted to Manichaeism. The Uyghur after him continued to embrace this tradition even when their empire on the Mongolian Plateau collapsed and they fled to present-day northwest China. But around the year 1000, the Uyghurs converted to Buddhism, the dominant religion among their subject peoples—the Chinese, Sogdians, and Tocharians—and would remain Buddhist until their conversion to Islam centuries later.

During his talk, Johan Elverskog assessed the conversion of the Uyghurs in the wider context of Eurasian geopolitics at its time, bringing together both social and economic motivations.