Sleep in Classical, Late and Eastern Antiquity. A Comparative Inquiry 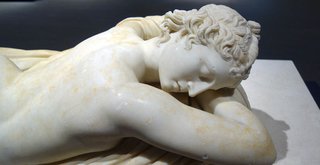 The workshop presents a comparative inquiry on the significance of sleep, its cultural coding and its connection to religion in the cultures of antiquity. It focuses primarily on the main Eastern and Western civilizations up to the fall of the Western Roman Empire.
Its primary aim is to complement the wide scale research done on the topic of sleep in the past decade by raising questions beyond the issue of dream narratives: about the complementary, dynamic states of sleep and wake, about the border mediating between the two. How do western and eastern ancient cultures of antiquity evaluate sleep and wakefulness? What kinds of social, ethical values and religious ideas are linked to them, what kind of sleepers - humans or gods – are represented in the sleeping state? Is there a divinity responsible for falling into a faint, a granter, a depository – like the Greek Hypnos? Besides the imaginations of the deities of sleeping, the realm of sleep and night remains a phenomenon that is closely connected to religious beliefs.

It has been regarded as a border crossing experience, a crossing between life and death, human and divine, and in this state of “in-between” many extraordinary things could happen, such as healing, divination or – through dreams – even journey into a transcendent world. We can raise the question: What do our texts and images tell us about the nature of sleep, about its connection with the complementary ideas of immanence and transcendence? What significant narratives can be found about sleepers in the researched cultures? How do metaphors, analogies and counterpoints define the space of sleep? In what ways are the various cultural codings of sleep linked to religious experiences, to heroization, to death, or immortality?