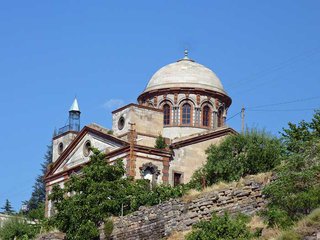 Hrant Dink Foundation has been implementing an inventory project of Armenian, Greek, Jewish, and Syriac cultural heritage in Turkey in order to contribute to the visibility of multiple and dynamic cultures of the diverse communities there.

The Cultural Heritage Map of Turkey has information on schools, hospitals, and cemeteries, as well as churches, monasteries, and synagogues. This presentation will focus on the first and most extensive field work that the foundation has yet undertaken as part of their mapping project, namely on their work in Kayseri. Of the 387 Armenian and Greek public buildings in Kayseri that could be listed by way of historical sources, 181 have been visited in situ.

Based on the findings, the lecturer will talk specifically about the material culture of the Greek and Armenian populations of Kayseri that can be gleaned from the remaining buildings, the majority of which consists of rock-cut Early Christian sanctuaries and nineteenth century churches.

The lecture series is sponsored by the RUB Research School and CERES.