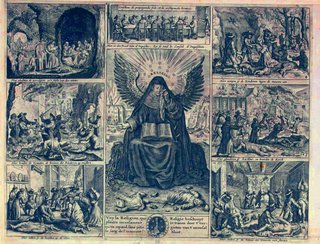 Exploring the role of emotion in religious and intellectual life, Peter Goldie has argued that not all emotional feelings are bodily feelings, and that feelings may also concern things in the world that reach beyond the body; such feelings, "bound up with thought", are what he has called feelings towards. "Many of these emotions – such as delight, wonder, awe, courage, doubt, tenacity, and hope – will be common between the intellectual and the religious sphere; others – reverence and contrition perhaps – will be particular to religious experience" (Goldie 2011. "Intellectual Emotions and Religious Emotions." Faith and Philosophy 28.1: 93-101).

Early modern religious writers considered "holy affections" to be morally superior to all other emotions. Appealing to the emotions became pervasive across confessional lines in the conversion and proselytizing strategies employed by theologians, preachers and missionaries in the early modern age. There are significant differences, however, in the emotions that the Catholic, Lutheran and Calvinist clergy tried to instil in their flocks. From around the mid-eighteenth century, as Enlightenment ideas permeated elites across Europe, the established churches went on the defensive – intellectually, culturally, politically, emotionally. This symposium explores the role of individual and collective emotions in the religious life and sensibility of seventeenth- and eighteenth-century Europe, as expressed in devotional practices, preaching styles, interpretations of catastrophic events or conversion processes. It particularly engages with questions of inclusion and exclusion strategies, anticlerical polemics and the perception and representation of heterodoxy and religious alterity.