RUB » CERES » KHK » People
de
Dr. Susanne Stadlbauer is no longer a member of KHK. The information given on this page may therefore be outdated. 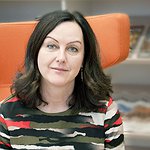 Susanne Stadlbauer was rewarded a Ph.D. with a dissertation titled Displaced Islamic Identities: Language, Time, and Space in a Post 9/11 America in 2012. Since 2013, she has been Resident Fellow at the Center for Media, Religion, and Culture (CMRC), University of Colorado, Boulder, and has been working on issues such as media theory, digital religion, hypermediation, media ambivalence, and digital social movements. From 2010 onwards, Susanne Stadlbauer has taken various teaching responsibilities and has been lead coordinator for Arts, Humanities and Social Sciences at the University of Colorado Boulder and the University of Wyoming.

Susanne Stadlbauer's research interests cover the ethnography of religious communities, digital media, media practice, new social and religious movements in social media and offline, Islam in the media, media anthropology, and linguistic anthropology. Most recently she has been working on projects involving theoretical considerations of sociological and anthropological approaches to religious conversions and on an ethnography of conversions of present-day Muslim refugees to Christianity.

Duration: October 2019 to March 2020
Project: Religious Conversions between Asia and Europe: A Semiotic, Historical, and Digital Approach to Religious Contacts