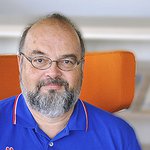 Henrik Hjort Sørensen has been the co-director of the Seminar for Buddhist Studies in Copenhagen together with Ian Astely (Japan) and Per K. Sørensen (Tibet) from 1987–1999 and has become its director in 2000.

His fields of interest cover East Asian Buddhism broadly defined with special emphasis on the relationship between religious practice and material culture including religious art. The Buddhist sculptural art of Sichuan has been at the forefront of his endeavors since the mid-1980s and he conducted numerous fieldworks and investigations in East Asia. In the past two decades, the various forms of Esoteric Buddhism (mijiao, mikkyō and milgyŏ) have taken precedence over other form of East Asian Buddhism, although Chinese Chan and Korean Sŏn Buddhism continue to be fields of major interest.

Before his participation in the ERC-financed research project BuddhistRoad Sørensen had already been involved with Ruhr Universität Bochum, to be specific when he became research Fellow of the highly respected Käte Hamburger Kolleg at the RUB in 2011. As a fellow he was directing his efforts to in-depth research into the relationship between Buddhism and Daoism in medieval China, including their mutual adaptations and borrowings.