RUB » CERES » KHK » People
de
Dr. Claire R. Maes is no longer a member of KHK. The information given on this page may therefore be outdated. 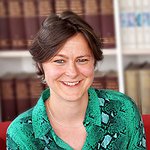 Claire Maes is a scholar of Jainism and Indian Buddhism, working primarily with textual sources composed in Ardhamāgadhī, Pāli, and Sanskrit. She focusses on the formative stages of monastic organization and identity development, although her work ranges more widely. In her research on the monastic history of early Jainism and Buddhism, she studies the reception and reification of this history in western scholarship. She further has a keen interest in the daily life and religious experience of contemporary female Jain ascetics in India, and the public dimensions of death and dying in Jainism. The main themes she pursues in her research include the process of othering, the dynamics of contact, the imagination of familial relationships, and the body as sacred space.

Her peer reviewed publications on Jain and Buddhist monasticism include “A Camouflaged Debate Between Early Buddhists and Jains,” published in the Bulletin d’Études Indiennes; and “Flirtation with the other. An Examination of the Processes of othering in the Pāli Vinaya,” published in the Bulletin of the School of Oriental and African Studies. She contributed recently a book chapter to Patrick Olivelle’s edited volume The Householder in Ancient Indian Religious Culture, to be published by Oxford University Press. In this chapter, she offers a philological examination of the different terms for householder in the ancient Jain texts. Bringing her analysis in conversation with Jamison’s discovery that the Sanskrit term gṛhastha (‘householder’) is a neologism in the Dharmaśāstra texts, she examines what the Jain sources can teach us about the development of the central institution of the twice-born householder in the Dharma literature.

Since 2016, she has been at University of Texas Austin, teaching courses on Jainism, the history of Buddhism, Hinduism in US Pop Culture, Introduction to South Asia, next to first and second year Sanskrit. Before that, she was employed at Ghent University where she completed her PhD in 2015 with a dissertation entitled Dialogues With(in) the Pāli Vinaya. At Ghent University, she taught elementary Sanskrit for five years, as well as intermediate and advanced Sanskrit for three and a half years. She also introduced students to Hindi and the Prakrit languages.

KHK Fellowship
Duration: July - August 2019
Project: Early Buddhists and their Ascetic Others. The Questions of Contact and Boundary Negotiations.