RUB » CERES » KHK » People
de
Prof. em. Dr. Boudewijn Walraven is no longer a member of KHK. The information given on this page may therefore be outdated. 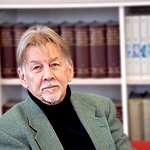 His research interests cover popular religion and religious practice (particularly shamanism, Buddhism and new religions) in Korea, dealing with both historical and contemporary aspects, as well as the social process of the creation of historical representations. A major focus in his research has been the way several religions or Weltanschaungen function within one society, which in the case of Korea inevitably means that attention also should be paid to Confucianism.

He has been the editor of the Sungkyun Journal of East Asian Studies (2006-2016) and also of the e-journal Korean Histories. He was a member of the advisory board of the Käte Hamburger Kolleg Dynamics in the History of Religions between Asia and Europe, from 2008 to 2009, and still serves on the advisory board of the book series of the KHK Dynamics in the History of Religions project. He has served two four-year terms as President of the Association for Korean Studies in Europe.