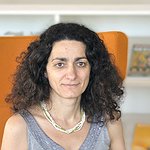 Before joining the JewsEast team, Zara Pogossian was Visiting Research Fellow in the Käte Hamburger Kolleg 2011/2012. She held an Alexander von Humboldt Fellowship at the University of Tübingen from 2010 to 2011. Prior to that she was Adjunct Assistant Professor of Philosophy at the John Cabot University in Rome, where she taught History of Medieval Europe and Byzantium from 2006 to 2010, and Adjunct Professor at the American University of Rome from 2005 to 2009. She also was a visiting lecturer at the University of Lecce in 2004.

Zara Pogossian’s field of expertise is Armenian Christianity and medieval Armenian history, including relations between the Roman Catholic Church and Eastern Christian Churches. During her fellowship she will prepare a critical edition of the Prophecies of Agaton a medieval Armenian apocalyptic text from the period of the Crusades, which will also entail a detailed historical investigation and a comparison of Apocalyptic traditions in other Christian cultures and, possibly, also Jewish and Islamic motifs.

Duration: July 2011 – June 2012
Project: The Prophecies of Agaton in the Context of Other Medieval Apocalyptic Traditions