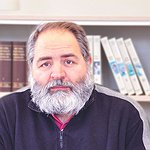 After gaining Ph.D. in 2006, Vasco La Salvia was appointed Tenured Lecturer in Archaeology and has been Disputer of Humanities and Geology at the University of Chieti (Italy). There, he has continued exploring the connection between mining, metallurgy (especially iron technology) and the organization of settlements and territory control; technology transfer and cultural interaction in Late Antique/Early Medieval Europe. In this regard, the new burial customs brought in by the Lombards and other Germanic peoples of the so-called Barbaricum (within continental Europe and southern Scandinavia), as well as the subsequent restructuring of the entire cultural horizon of the Mediterranean have featured prominently in his studies.

His publication record has concentrated on Archaeology and Material Culture of the Migration Period, archaeological Methods and Theory which has taken into consideration also relevant anthropological discussions, the Development of Iron Age society in Central Europe and Southern Scandinavia, cultural Interactions and Integration between Late Antique/Early Medieval periods but also reports on archaeological missions.

Besides research and publications, Vasco La Salvia has lead and taken part in a number of archaeological excavation projects, including in various regions of Italy, the Republic of Armenia and Cyprus. He is also a member of the Editorial Board of Post Classical Archaeologies and is part of the Advisory Board of the Society of Medieval Archaeologists in Italy (SAMI).

Duration: January 2018 to March 2018
Project: Forging Identity and Shifting Boundaries. The Role of the Smiths within a Changing Religious Landscape of Early Medieval European Societies.