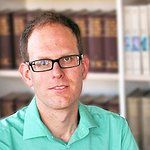 Sebastian Rimestad finished school in Norway and studied Political Science and International Relations at the Universities of Aberdeen, Scotland and Tartu, Estonia before turning to Religious Studies at the University of Erfurt, Germany, where he completed his PhD in 2012 with the dissertation The Challenges of Modernity to the Orthodox Church in Estonia and Latvia (1917-1940).

During his fellowship at the KHK, Sebastian Rimestad will continue his research into Early Modern Religious Contact in the Borderlands between Orthodox, Catholic, and Protestant Christianity in the Baltic Region.