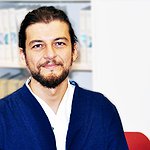 During his KHK-fellowship, he plans to investigate the genesis of the idea of visual religious communication in the early modern world, an idea that has deeply influenced the status of images in interreligious contacts both in the modern and in the contemporary epoch. His research will concentrate on visual methods for the evangelization of the early modern Jewish internal mission of Rome and for that of the natives of the Mesoamerica.