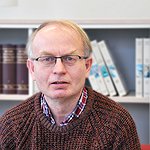 Ian Rutherford began his career with a Junior Research Fellowship at Trinity College (1985-8), followed by Assistant and Associate Professorship at Harvard (1988-95). Since 1995, his academic home has been the University of Reading University (appointed Professor in 2000, after previously having been Lecturer, Reader and Head of Department. From 2003 to 2006, he was Visiting Professor at Florida State University.

The principal area of Ian Rutherford’s research for some years has been aspects of Greco-Roman religion, specifically pilgrimage, sacred travel and religious networks in the Greco-Roman world. One other area is the relationship between Greek religion and the religions of ancient Anatolia, specifically the Hittite and Luwian religions, as they are known through cuneiform texts. The third area of interest is the relation between Ancient Greece and Ancient Egypt, especially the Greco-Roman reception of Egyptian religion.