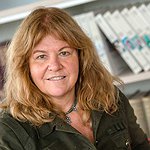 Eva Kocziszky studied Hungarian, German and Ancient Greek Philology at the University of Debrecen and Budapest (ELTE). She earned her Dr. phil. with a dissertation about the poetics of Hungarian Classicism (1982) and also earned a Ph.D. with a study on Hölderlin’s translation of Sophocles in 1987. In 2000, she gained the highest academic title doctor of science in Hungary. From 2006-2010 she was professor and head of German Studies at the University of West Hungary. Her current position is a professor of the University of Pannonia (Veszprém), Chair of the German Department, Hungary. Since 2009 she is also a permanent external professor in the UFR at the University Lorrain (Metz), France.

Her research focuses on German poetry and the presence of antiquity in modern times. In addition to them, she is also interested in the history of religious ideas and their inherent aesthetic power. She has been a visiting research fellow at numerous institutes, including the Collegium Budapest (2005, 2009) and the International College Morphomata at the University of Cologne (2010/2011), at the Getty Research Center (Los Angeles 2012).